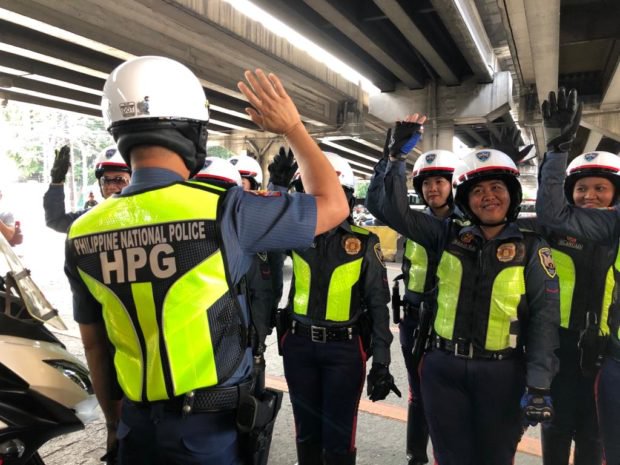 Just when we thought our country was slowly adopting a more feminist mindset, our very own government authorities prove us wrong.

Last Sept. 4, 48 motorcycle-riding policewomen were deployed by the Philippine National Police – Highway Patrol Group (PNP-HPG) to help ease vehicular traffic congestion in major thoroughfares in Metro Manila and other parts of the country.

The Metro Manila Development Authority (MMDA) has been working on ways to ease the highway pandemonium, but since traffic has been more uncontrollable than ever, PNP-HPG has partnered with the MMDA to aid the process—bringing in policewomen to EDSA.

Seeing this news right off the bat made me think: Yes! The city needs more traffic enforcers now more than ever. Because if you haven’t noticed (and I’m sure y’all have), traffic in the metro has been more chaotic these past few months, and getting anywhere takes at least one to two hours. The ever-growing number of cars invading the streets proves that more manpower is needed.

More than that, the deployment of policewomen is a progressive step towards advocating for women equality in the workforce. Traffic enforcers and police in the Philippines is an occupation heavily dominated by the male population, and women police officers will be changing this long-standing norm.

Wonderful, isn’t it? This serves more female representation in public service, more jobs for women, and additional manpower to appease the demands of our turbulent traffic. I mean, that was PNP-HPG’s goal, right?

In an interview by One News PH in their segment called “The Chiefs,“ to PNP-HPG spokesperson Lt. Col. Ritchie Claraval and MMDA EDSA Traffic Chief Col. Edison “Bong” Nebrija last Sept. 11, the two spoke about how the newly deployed policewomen—who were named “ladies’ strike force”— are so-called “game-changers” to traffic. Why? According to Col. Nebrija, it’s because they’re “girlfriend material.”

Even the interviewers of “The Chiefs” were obviously stunned by such a statement. Interviewer Amy Pamintuan then turned to Col. Claraval, asking what the ladies’ strike force is exactly, and the Col. answered: “We call them the ‘strike force’ because they have striking looks.”

Needless to say, this goes down on my list of the most appalling things I’ve ever heard on TV.

Twenty-three women were given heavy patrol duties, sent to the middle of EDSA traffic ruckus—not because they are seen as capably equal to male traffic enforcers, but because they’re “pretty” and “more pleasing.” Weren’t we already past the abominable phase of women objectification, or at least moving away from it? What year is this? Why do men still see women as solutions to a problem, puppets on strings, as formulas? Furthermore, what do looks have to do with traffic control?

“It’s more pleasing, I guess,” said Col. Nebrija (unapologetically, if I may add), “If somebody is apprehending you, has a pleasing personality, it will start with a smile, appreciation. This might be a good formula for HPG and for the police force.”  He then proceeds to brush off warnings that he might be accused of being sexist by saying that “EDSA is stressful enough.”

First of all, Col. Nebrija, women are not formulas. Your false gender stereotypes are not the answer to one of the most distressing challenges that our country is currently facing.  And even though society—especially the current generation—has been striving to veer away from patriarchal practices of history (where women were treated as tools, accessories, and maidens expected to smile and wave for the men), such discriminatory behavior still seems to remain. And this is a perfect example of sexism.

And coming from colonels, whose statements are being aired to the entire nation, Col. Nebrija and Col. Claraval’s testimonies will resonate with the minds of those who are listening, people that drive who are watching, and men who will think it is acceptable to look at these women as mere “pretty faces” and “stress-relievers,” because the authorities themselves have stated their purpose: “girlfriend material.”

Col. Nebrija and Col. Claraval, you have, quite explicitly, insinuated that drivers are allowed to look at these women as mere objects of desire.

“The drivers would say ‘Uy nakakahiyang mag violate tayo, may mga magagandang babae diyan na HPG,’” (‘It would be embarrassing to violate [traffic rules] because there’s a pretty woman HPG’) said Col. Claraval when he clarified the purpose of good looks as a qualification to become a lady HPG.

We have really come to the point where the government is now resorting to superficial solutions to solve large-scale national concerns, that are obviously ill-conceived and unabashedly sexist, and box the role of women in policy-making as a reason for their failure to solve the problem of traffic in Metro Manila. This is a major setback in the progress of women’s equality and anti-discrimination movement many members of our society have been standing by for the longest time. It goes to show that so much still has to be done, and it should start with the people who are tasked to lead and authorize public decisions.

It is difficult to be a woman in the current state of our country. With men like Col. Nebrija and Col. Claraval, who are comfortable in making facetious decisions and testimonies for the “benefit” of our nation, we must not be complacent and ignorant of the conditions that women have to live with. This deserves a greater call to action, a colossal reaction from the public that will challenge the misogynistic perspectives of this Jurassic sexist way of thinking, and will cultivate an environment that empowers women to go beyond the stereotypes of society.

Be the next burlesque queen with Beast House’s beginner lessons

These winning ‘Restroom for All’ designs prove that inclusivity is beautiful

Previous
Be one of the first people to join the “Preen.ph Community” on Viber

From an idea with a potential, online tech store ‘Kimstore’ is now a thriving business