Pride 20 is fighting back, Manila Police will be hearing from their lawyers 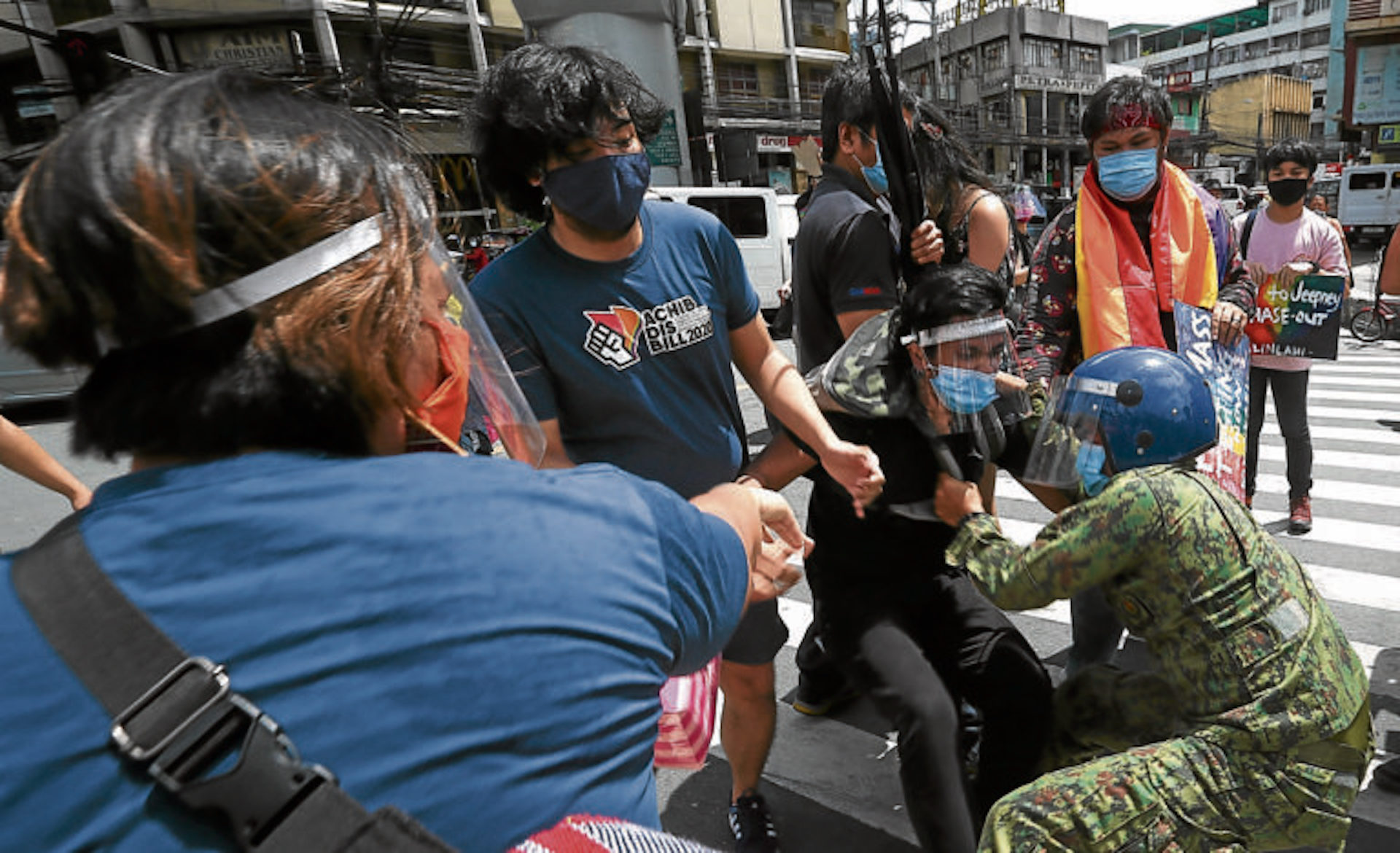 Cop takes over activists' car in LGBT rally DISPERSAL Activists celebrating LGBT Pride Month at a rally in Manila near Malacañang on Friday are rounded up by the police. Their lawyer later questioned their arrest, especially after an officer reportedly commandeered the protesters' private car. -- AFP
Share
0shares

The individuals of Pride 20 were released earlier today after the approval of The Manila Office of the City Prosecutor. Their case will be referred for further preliminary investigation.

The 20 activists who were arrested at a peaceful Pride protest last Friday, Jun. 26, will be filing charges against the Manila Police District (MPD) who disrupted their rally and commandeered the vehicle they were using.

Three minors who were arrested were released last Friday and those who remained underwent inquest proceedings last Saturday. However, they were told that the resolution for their case will be issued tomorrow, Tuesday, instead. They’ve been in detention this whole weekend.

According to a report by Inquirer, Pride 20’s legal counsel, Minnie Lopez, hopes that they will be released today on humanitarian grounds, especially because the threat of contracting COVID-19 is high at the packed detention facility in police headquarters.

Pride 20 insists that they were practicing social distancing and wore face masks during the protests but MPD still charged them with resistance to authority and illegal assembly. Lopez also said that the protestors experienced discrimination while in detention. Rey Valmores-Salinas, a trans woman, was initially not allowed to be detained in female quarters.

Valmores-Salinas recounts, “There was a time when I was asked to go inside a room to verify documents and I saw a police officer looking intently at me. It made me uncomfortable. There were also cases of misgendering in which they would insist on calling me ‘sir.’”

Lopez assures that they are documenting these incidents as references for the countercharges they will be filing. “There is a clear pattern of impunity here … Human rights do not stop just because there is a pandemic. If we do not fight for our rights now, the situation will only worsen afterward.”

Since their arrest, netizens online have called for the group’s release with the hashtag #FreePride20. Aside from online support from celebrities, influencers and politicians, the National Union of People’s Lawyers also voiced their support for the group, saying, “Holding a protest action is not a crime as this is a basic human right guaranteed and protected by the Constitution and international law. Contrary to the baseless assertions of police operatives, Batas Pambansa 880 [Public Assembly Law] in fact recognizes rallies and only requires permits if the protest action is held in a public place under Section 4 of the law. What is actually prohibited under BP 880 is police intervention during rallies, which is clearly provided for under Section 9.”

Related stories:
Makibeki! 20 arrested in Mendiola Pride March
Pride is always a protest, now is a good time to remember it
Report the truth even if the government scares you
3 not-so-easy steps to make sure your involvement is not just performative

These winning ‘Restroom for All’ designs prove that inclusivity is beautiful

Previous
KC Montero was arrested for dining at a bar, but why was a bar even open?

Next
Queer safe spaces in a post-pandemic world—what’s that going to look like?
Start typing to see results or hit ESC to close
fashion fashion news music Culture News movies
See all results

Rey Valmores-Salinas knows there is power in words