Today, We Buried a Thief Among Heroes 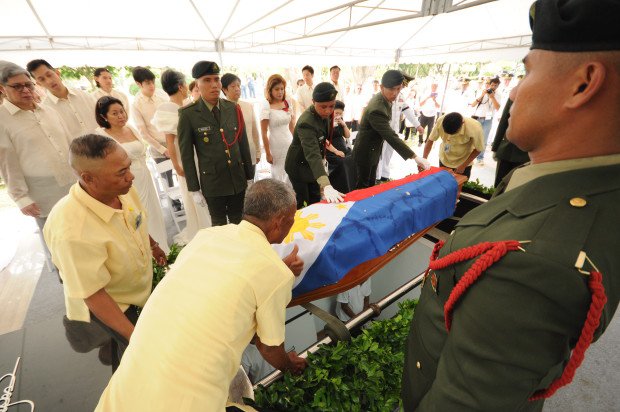 Today was like any other day. I took the train to work, sardined among many others. We were all just going about our day. Unlike in 1971, when students would protest against Ferdinand Marcos. Unlike then, when my mother carried an ice pick in her pocket when she went to school. Unlike back then when my father, who donated his car to his fellow protesters, an impromptu decision in the middle of the rally. These protests would be used as one of the reasons to justify the declaration of Martial Law in 1972.

Today we buried a thief among heroes. It disturbs me. It disturbs my generation and they have expressed it the best way they can: via social media. No doubt commendable but, sadly, it’s not enough. Marcos got away with a private burial in the Libingan ng Mga Bayani. As students try to drum up numbers and rally at different points, hopefully they will buildup and cause a change as their parents once did.

My uncle, a man who would join in the protests in the ’70s, told me the other day that back in his day, a mere mention of this happening, bedlam would be in the streets. The protests of today would be nothing to how he and his generation would receive it: tires burning, work and school postponed, and people swarming the houses of the justices who allowed this atrocity to happen.

But that wasn’t today. Much of the people of this generation did not experience Martial Law and the crimes of the Marcoses personally. Those who did, like my dad, are already dead. I wonder what he would say now, he always joked about how Marcos owed him a car. My mom is indisposed, having the house to worry about and weak knees. Same goes for my uncle.

Today is our fight then. Have we failed? The optimist in me will say that no, this is not actually when the fight ends. We will tell this story of Marcos and how he ended up with a burial he did not deserve. We will repeat it,  will understand it completely, until we have learned our lesson and have applied it.

It doesn’t end with him being laid six feet under. He may be buried, but he must not be laid to rest. The stories and the lessons that his regime have taught us about freedom must be recounted all the more.

We will close this chapter but not this story. Talks of exhuming him are currently being raised. Discussions of including the Marcos regime in school textbooks will no doubt heat up. This is what today has taught us. Perhaps this is the generation who will make sure to teach the future that at the mere indication that there is a threat to democracy and justice, we must mobilize. Here is a concrete example of what happens when we don’t.

For now, let Marcos lie among the heroes. Comparisons of him to those around him: Laurel, Garcia, Romulo, Quirino, will starkly provide a contrast to his tainted legacy. People will see who is the odd man out, who doesn’t belong, how he got there, and why his story must not be a reality any more. Never forget. Never again.

Can we stop glorifying ‘lover boys’ and objectifying women in ads?