A collection of politicians’ confused reactions to the COVID-19 spike 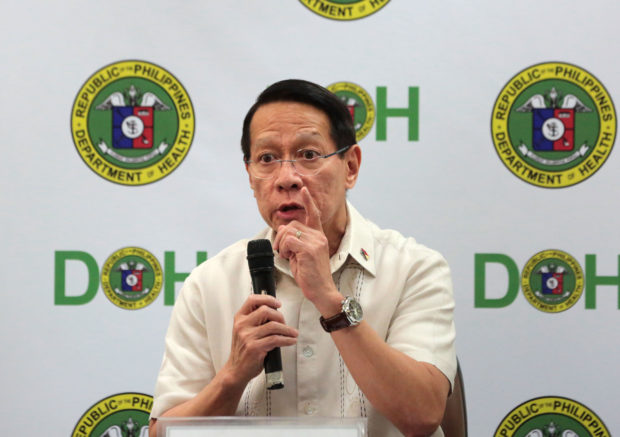 MEASLES OUTBREAK / FEBRUARY 7, 2019 Health Secretary Francisco Duque III appeals to parents to have their children vaccinated against measles at a news briefing at the Department of Health (DOH) headquarters in Sta. Cruz, Manila on Thursday, February 7, 2019. The DOH confirmed an outbreak of measles in the National Capital Region (NCR) and in Central Luzon due to the continued vaccine scare created by the Dengvaxia controversy. INQUIRER PHOTO / GRIG C. MONTEGRANDE
Share
0shares

The country just logged 7,103 new COVID-19 cases today, which is the highest number recorded in a day since the start of the pandemic. In total, there are now 73,264 active cases, to push the overall confirmed cases to 648,066; the death toll meanwhile stands at 12,900.

And, as Senator Risa Hontiveros pointed out: We are still in the first wave. “We have NOT flattened the curve yet. And we never will if we remain in denial of the problem and what needs to be done to solve it,” she said.

Cue in a lot of other confused politicians who, despite knowing what the government (aka them) has “done” to try and prevent the surge, seem to be flabbergasted by the number, as if they didn’t just go through the same year we did.

Earlier today, when asked about the progress that’s been made, Duque appealed for people to think about the healthcare workers, as if his critics weren’t actually criticizing his own actions towards fighting the virus, but random healthcare workers on the frontline for some reason.

Aside from this, Duque went around a barangay in Parañaque City to distribute face masks and remind people to keep safe (which, IDK, going around a barangay with your envoy and the press surrounding you doesn’t seem like the most COVID-safe activity out there). That leads me to ask: Why now? This should’ve already been happening a year ago at the onset of the pandemic, or at least when they started enforcing mandatory face shields.

Let’s not forget that, among other things, Duque was also the man behind the “botched Pfizer deal” that, had he given the necessary papers in time, would have secured the vaccine for Filipinos early.

Roque tested positive for the virus on Mar. 14, though he is reportedly asymptomatic. On Mar. 16, he refused to show his test results, saying, “Bakit naman gusto nila? I don’t understand that, but let me see if I have it. Hindi ko maintindihan why I have to show it actually,” adding, “Anyway, I don’t think it’s important.”

Just on Mar. 8, Roque said during a press briefing: “We were excellent. We controlled the spread of the disease, especially when compared to richer countries with more modern hospitals.”

Related Stories:
Harry Roque thinks 70,764 COVID-19 cases isn’t alarming but should concern us
Nobody asked for a spox Roque music video, but here we are
Dear, Harry Roque: We are not ‘OA’ for calling out Duterte’s rape jokes
I never thought a COVID-19 mascot would debut as a pandemic response, but here we are